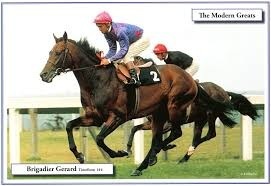 I thought I would do a little mid week blog for a few I fancy at Haydock and Sandown. The Sandown meeting is always a good one with the annual running of the Brigadier Gerard Stakes. The bloody weather is playing havoc with the horses and the going at the moment. Lets hope the next week is dry ready for the Derby.

BONNIE GREY 1840 SANDOWN (NAP) – this is a cracking race! My selection was very impressive at Warwick in testing conditions. She hardly even broke sweat and the jockey never had to move a muscle, she could be very smart and this race will certainly be an indicator of that. Cock of the North ran very well in the Brocklesby and a repeat of that would see him go close. Via Via caught the eye when going away at Ripon and the form of ROUDEE was franked by MIDTERM BREAK on Saturday. An intriguing race!

BROWN PANTHER 1915 SANDOWN (NB) – I love this horse, he has got better and better over the last few years and he could be a high class Cup horse to follow. I think he will have too much for these today and his defeat of HILLSTAR at Chester was a good one. This trip will suit him and I think he’ll take this quite easily. I’m intrigued to see how MENORAH gets on!!!!

ANDERIEGO 1550 HAYDOCK (TREBLE) – this horse hasn’t won for a while now but he is on a very appealing mark. He has some form on soft ground and I just think there were signs of some sort of a revival the first run out this season and this softer ground may eek something out of him. If he puts his best foot forward this is a winning mark for him for sure!

RACE TO GLORY 1420 HAYDOCK – has run reasonably well in a couple a maiden races over 1m2f and this step up in trip should help and I think the ground will suit him more too. This trip takes some getting here especially on soft ground and I’m hopeful of a solid run. 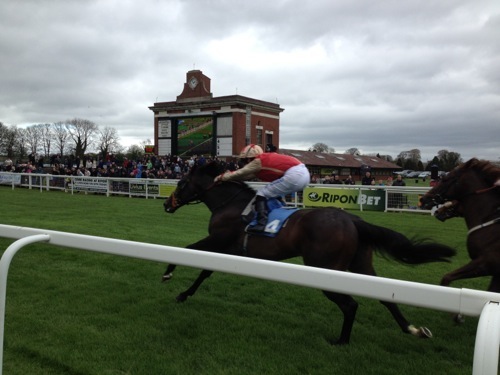 Cracking day on the blog on Sunday with Mighty Yar (5-1) and GOLDREAM (25-1) going in. If Ihtimal had won the Guineas I would have had a very nice payday.

This was a photo of ROUDEE I took bounding away to win on his racecourse debut at Ripon the other week. The form of theta race is working out well with the second and fifth going on to success and I fancy him to win today despite his high draw. He looked a decent prospect at Ripon and I was taken by the way he went away from the field in the closing stages. On to this cracking meeting that I always wish I could attend but it always falls in term time!

MAWAQEET 1445 CHESTER (NAP) – this horse has changed hands and runs for the McCain stable who have won this twice in recent years. He his a smart prospect and showed decent staying form behind BROXBOURNE at York last year, he was also narrowly defeated by EAGLE ROCK at the same track. He’s only three pounds higher than his BROXBOURNE defeat and is capable in my opinion of winning a race like this this year.

PSYCHOMETRY 1415 CHESTER (TREBLE) – three solid runs last year leads to this one getting a mark of 81 for her debut this year. She finally got her head in front after two defeats at Kempton last time. There should be much more to come from her this year.

CASPIAN PRINCE 1515 CHESTER – this guy brought some cash home for me when he made all from the front at Epsom. Elusivity didn’t help the form much at the weekend although this guy has now got trap one at a course, like Epsom, where the draw is so important. He needs to fly out of the stalls and they won’t catch him, any rain overnight will help his chances too.

Good luck everyone if you’re having a flutter and enjoy the next three days from the Roudee.