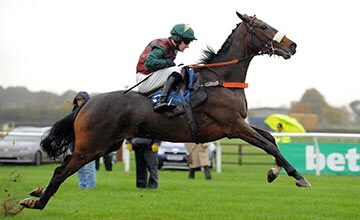 Photo by Martin Lynch : Racing Post photos
I really do love this meeting at Cheltenham, it's the official kick start of thr NH season for me. All of our old favourites and the new pretenders to the throne are out and it will be a fascinating day of racing. My old man gave the blog a winner with NABUCCO the other week, as I continue to misfire! I hoping for a change of fortune today. Sit back and enjoy a cracking day!
Here are the selections for today :
OSCAR ROCK 1425 CHELTENHAM (nap)
This guy keeps on improving and the blinkers have really helped. He has been raised a further 8lbs after his comforrable Market Rasen success. He travels well in his races and will appreciate the quick pace of this race I'm sure. His trainer was rather confident of his chances earlier in the week too. He moves like he will love this test and despite him now playimg with the big boys I think there is further improvement in him. Sound Investment is my other one in this, he just keeps giving and he could be the fly in the ointment! What a fab race in prospect!
SOLL 1350 CHELTENHAM (nb)
Has always been a decent animal and had two wins from two when joining the Pipe string. He beat REBEL REBELLION at Exeter over three miles on good to soft and that horse franked the form with a win next time. Soll did too beating RELAX again, despite a 4lb pull. He was all geared up for the National and managed a creditable ninth with a broken blood vessel. A sound jumper normally and a smooth mover, I expecting a big show with at least a place.
SO FINE 1500 CHELTENHAM (treble)
This fella has a decent record around here and despite his long lay off he has a great chance at a huge price! He will enjoy the decent ground and he stays very well. He was on my tracker for last year but was injured and he stays on my tracker this year. He'll definitely come on for the run but I think he has a great chance of outstaying them up the hill.
COPPER KAY 1605 CHELTENHAM
This horse is well bred and related the smart Copper Bleu. She has two decent succeses sandwiched between a creditable fourth in Sandown's Listed race. She comes here with a run and a smooth victory in the bag and I'm expecting more from her.
My Dad's selections are :
COGRY 1350 CHELTENHAM
BOONDOOMA 1425 CHELTENHAM
BATAVIR 1500 CHELTENHAM
HEDLEY LAMARR 1535 CHELTENHAM
PLACINGS
FATHER 1-0 SON
PROFIT/LOSS
Father +£10.61
Son -£0.32